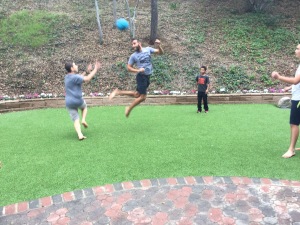 First of all a quick summery of what headers and volleys are. It is a game where you have to score in total 10 times and if you are the keeper you may get out of goal by catching the ball or the shooter putting it wide. After the 10 goals are up the last one in goal has to owe everyone tht scored one favor.

This week I am here to report on an a crazy game of headers and volleys we played on Saturday. We played for an hour straight with just volleys flying everywhere and it was a lot fun. The people that were playing was Nick, Will, Michael, George and me which is the perfect game size, five people. It started of with us just kicking around then George suggested that we play headers and volleys so we did.

When we started we had no idea how long this will go on for. Michael finished in goal first wile

being chipped my Nick for the tenth goat. The next person to finish in goal was Nick of all people wile will was in goal on the last goal. Will caught the ball when Nick attempted hischeeky chip once again. Will caught the ball with quite a bit of difficulty and gave it to Michael who scored to finish the game. Half way through this game Nick asked for a glory moment where he goes very far out and the keeper throws the ball to him. The player usually misses which is why the keeper would agree to it. So as I was saying Nick walks back, takes a powerful shot and scores with a shot to the top right  corner. Later on in the same game I decide that I will also take a glory moment. Once again Will throws the ball up and I also put it away in the bottom left corner. The game ends with Will being in goal. The next game gets very intense with Will being in goat we
start to Queen Bee him that is were if you are in goal from 7 left on and your are in goal last then you will owe everyone two favors. Queen Bees are a very rare ending, but lets get on with the game. Will is in goal with two left and Michael misses the shot and we finish off Michael

The next game I end in goal with me giving it to Michael and will with a beautiful cross, but they
both moved out of the way which put me in goal on four. They beat me down, but they next game is the one of the match. I am in goal and get scored on once, but then Michael goes in and we Queen Bee him. The last goal was Will finishing a good pass by George. Will wants to leave after this, but we don’t let him. In the next and final game George ends in goal. The best of all of us ends in goat with Nick scoring the last goal we all go crazy then we stop and it is about 1:30 by now so we go get some lunch.